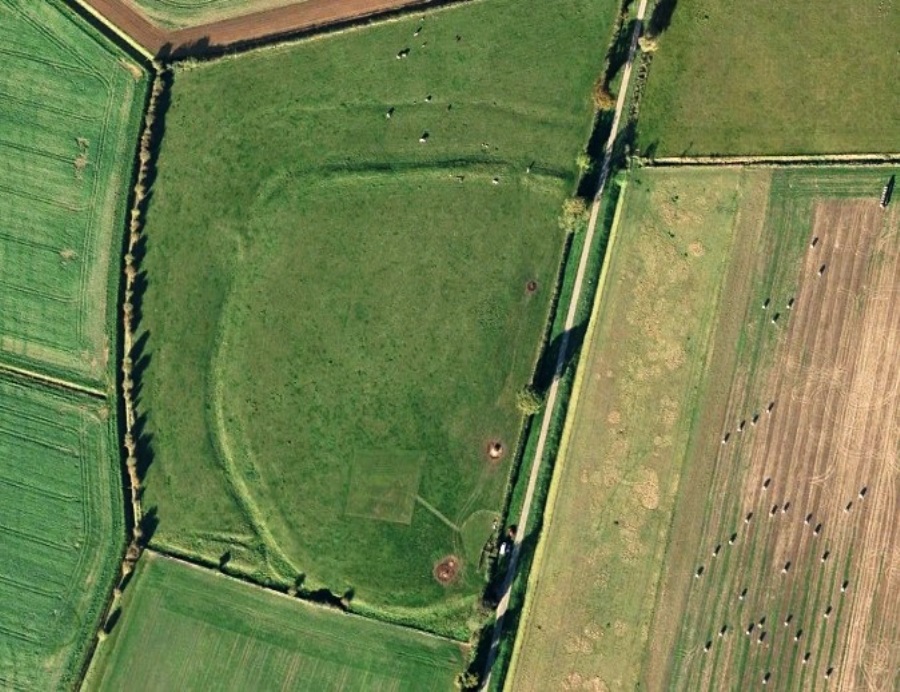 Borough Fen Iron Age fort is located north of Peterborough, between Peakirk and Newborough.
Archaeologists sometimes describe it as a “hill fort” which is a little perverse since it is on a flat landscape, barely above sea level. Their “logic” is that it has parallels with the characteristic forts from this time found on hill tops across the British landscape.

Constructed in the Middle Iron Age, only the enclosure banks of the ring-fort are visible today. They define a roughly circular area of 3.8 hectares with diameter of 220m.

The interior is entirely buried beneath clay and all its floors are still intact. The bank and ditch that surround it, too, are intact and the defensive ditch is waterlogged.

The site is clearly defined in aerial photographs. The site is bisected by Decoy Road; to the west the site is on protected land, under pasture. To the east it has been more affected by plough damage.

An augur survey in 1987 demonstrated the survival of well preserved buried soil and a major phase of occupation, sealed by alluvial deposits of probably Roman date.

In 1991 the Ancient Monuments Laboratory carried out satellite photography and resistivity survey.

In 1992-3, limited excavation was carried out along the sides of Redcow Drain, and sections through both ramparts were exposed showing possible timber revetting. Organic material and Middle Iron Age pottery (third to second century BC) were recovered from the water-logged primary fills of the main ditch.

In December 1993, an analytical earthwork survey of the enclosure was undertaken by the Royal Commission on Historical Monuments of England (RCHME). The survey confirmed the position of the entrance on the east side of the enclosure with evidence of an in-turned gateway. Other postulated entrances are less certain: a breach in the north side seems to be the result vehicular erosion.

The interior of the enclosure is slightly elevated. Building foundations set against the inside of the ditch occur mainly to the south and a few to the north.

A complete horse’s skull was recovered from the bottom of the outer enclosure ditch. It had been place in a way suggestive of ritual offering.

There are about 4,000 recorded Iron Age forts in Britain and Ireland. Their purpose is still much discussed but the most common view is that they were defensive settlements.

It is possible that their purpose varied. For instance, the fort at Stonea Camp near March does not show signs of settlement and it is suggested it was more a meeting place for trade and/or a refuge for times of conflict.

They appear during the first millennium BC and mark a transition from the middle Bronze Age settlement format of groups of round houses set within more scattered enclosures. It is likely that they would have been significant to the emerging regional tribes such as the Corieltauvi, Iceni, and Catuvellauni who were consolidating their positions in the centuries prior to Roman occupation.

Malim records 53 “hillforts” in East Anglia and Lincolnshire. There is a concentration on the higher ground of the Chilterns and other areas of chalk downland, but also a number spread around the Fen basin. Not confirmed as a fort, but with potential to be interpreted as such, is a defensive settlement at Fengate, Peterborough excavated by Pryor in the 1970s. 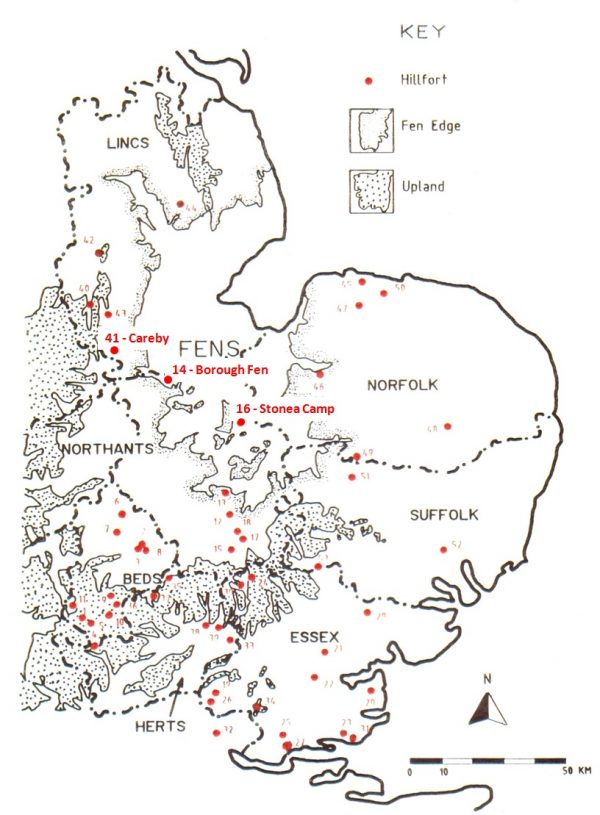 Hillforts in the East of England (after Malim)

Borough Fen has been described as ‘one of the best preserved Iron Age sites in the country’.

Despite damage, the interior is protected by later alluvium which preserves a nationally important Iron Age occupation area. Due to water-logging it offers great potential for further understanding of life at this time.