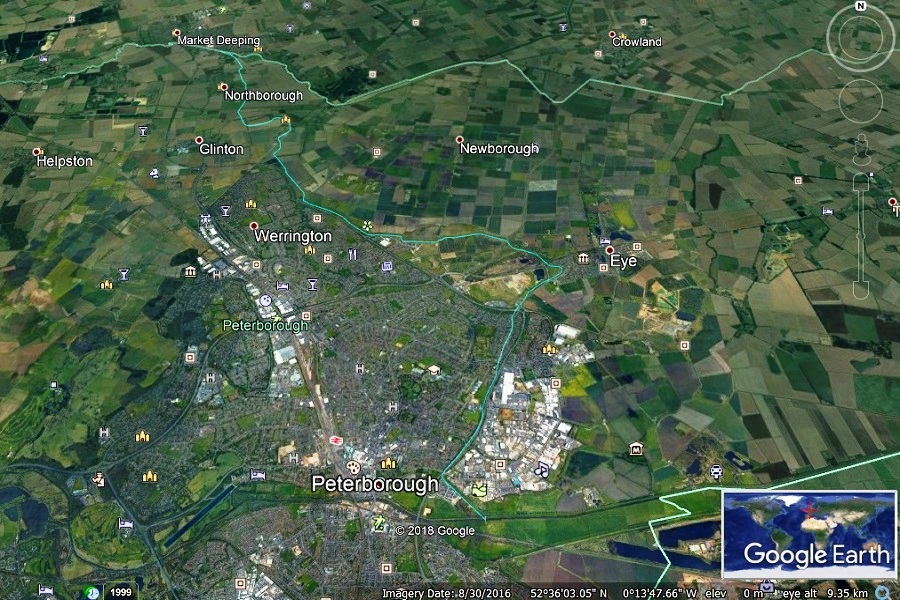 What is Car Dyke?

Car Dyke is a 57 mile artificial water channel (or series of channels), thought to have been constructed by the Romans during the first or early second century AD. The dyke skirts the western edge of the fens from the River Witham at Washingborough near Lincoln to the River Nene at Peterborough. Many sections are protected as a scheduled ancient monument.

The name Car Dyke appears in Medieval times and may relate to a prominent landowner, Kari, or the old English “Car” which means an area overgrown with marsh, reeds and shrubs.

Early antiquarians (and Ordnance Survey map makers) extended the scope of Car Dyke to include artificial waterways between Peterborough and Waterbeach near Cambridge. Archaeological evidence does not support this interpretation. These Cambridgshire sections are best considered separately, as reflected in their medieval names such as Cnut’s Dyke and The Old Tillage.

There is no firm consensus as to its purpose: a defensible boundary, a canal or an early initiative to drain the fringe of the fens. 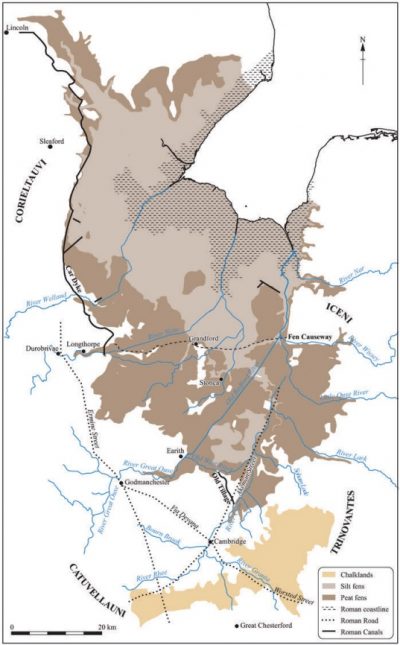 The course of Car Dyke was shown on the 1st edition one-inch Ordnance Survey map of 1824; it is visible in aerial photographs along parts of its route; and in some sections it remains as a minor waterway.

Its junction with the Nene is confused in that the river has been heavily canalised and re-routed since Roman times. It seems likely that it would have joined at approximately the same place as the Cat’s Water Drain just east of the Frank Perkins Parkway bridge over the Nene.

It ran north between Eastgate and Fengate then through “Burgh Park” between the current sites of Perkins Engines and the City of Peterborough Academy north of Padholme Road. The next current day evidence of the dyke is a slight depression to the west side of Eye Road, where mature weeping willows in front gardens provide an extra clue. 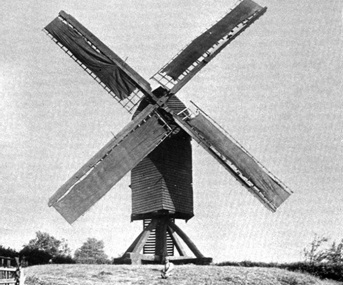 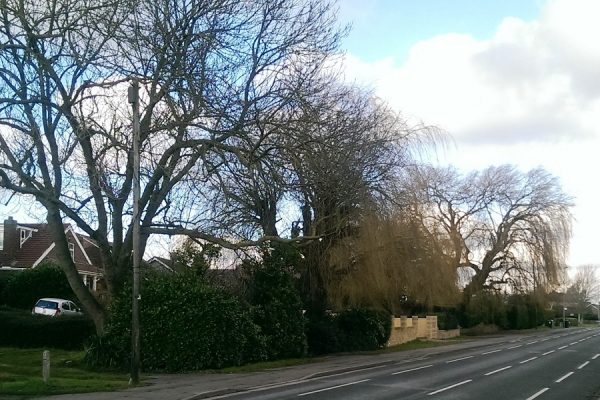 Willows in a depression at the side of Eye Road

The waterway then follows the contours north-east towards Eye where it loops back to the west. A new bridge was constructed over the Dyke in 2012 to carry the A16 to Spalding. The dyke marks the north-east boundary of Peterborough as it skirts Gunthorpe and Werrington before heading towards Peakirk. 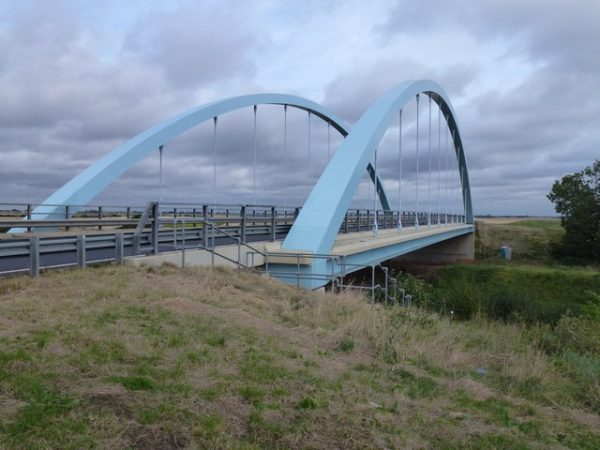 Car Dyke bridge over A16

The visible course is lost in Peakirk but recent archaeological work has identified its route across the village green before looping west and then north along Northborough’s fen edge. The surviving earthworks to the south of Peakirk measure 4m wide by 1.5m deep while those to the north-west measure between 3-5m wide by 0.75m deep. 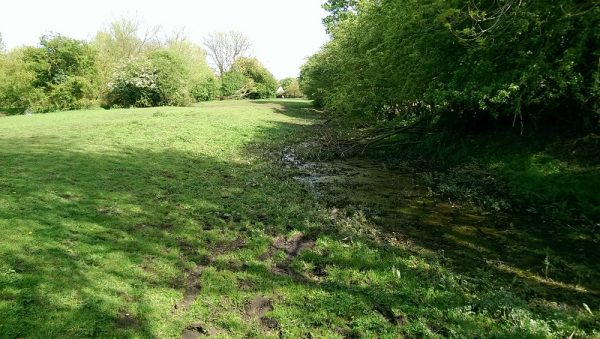 Between Northborough and Deeping its route is marked on maps and it was exposed during the Time Team excavation of a causewayed enclosure in 2004. 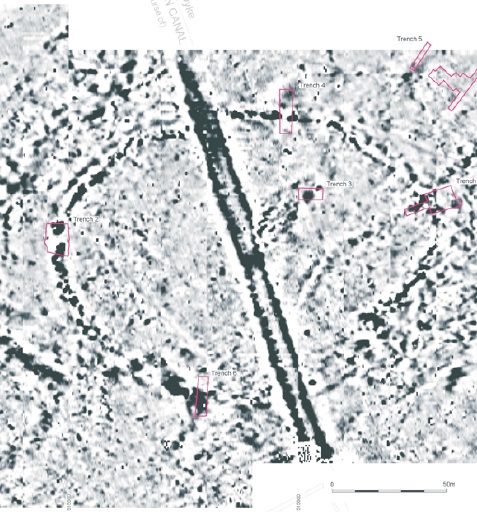 Car Dyke must have run north to north west from the Welland on approximately the line of Godsey Lane, but there is no clear trace south of Towngate Outgang. Beyond, a ditch with a definite bank to the east continues into Langtoft parish.

At Langtoft Hall, geophysical survey of the area immediately west of the moat in 1991 located a sand bank parallel to the garden wall – probably a remnant of the Roman waterway.

Excavations south of Baston in 1990 identified three profiles of the Car Dyke. Its depth at this point was 3.8 metres, and it was fifteen metres wide at the buried ground level, and the bed was 5.5 metres wide. A sherd of early medieval pottery was recovered from the higher fills of the ditch which suggests that the Car Dyke was still useable and relatively clear at least into early Anglo Saxon times. 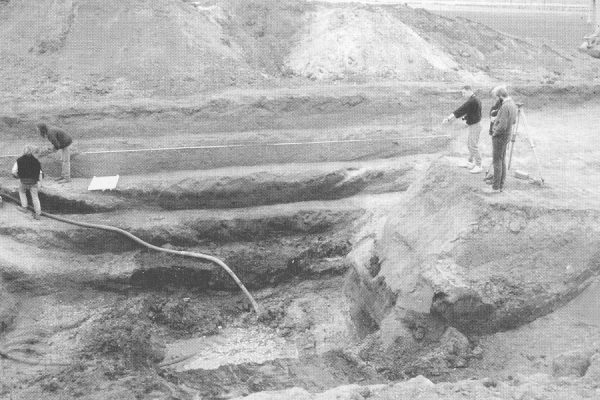 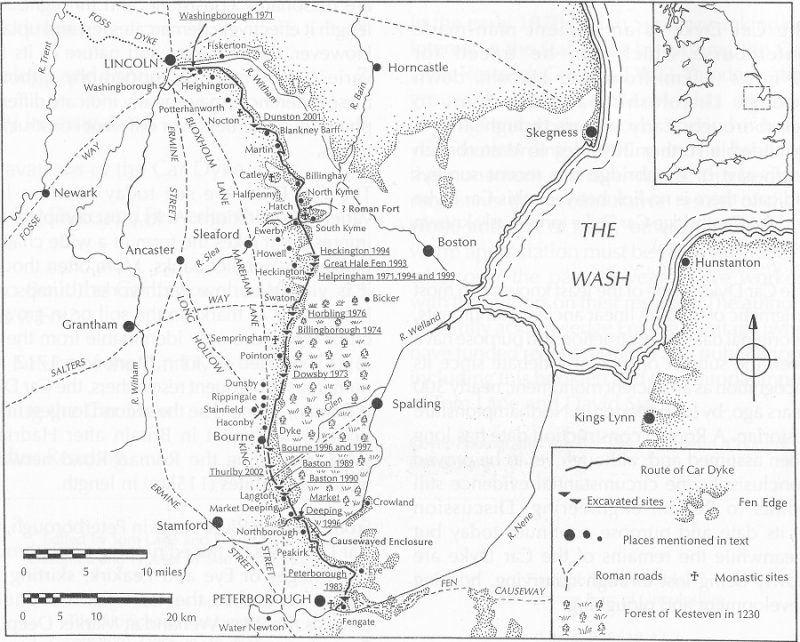 Where did Car Dyke “Fit”?

Most early writers, including William Stukeley, saw Car Dyke as a navigable Roman canal, connecting the fenlands of Cambridgeshire and Lincolnshire with the major Roman markets of Lincoln and York. Excavations have found coal from the Midlands in use at a cluster of Roman forges between Cambridge and The Wash suggesting possible trade and transport along the Car Dyke. Return cargoes might have been pottery and grain to supply the garrison at York. At its northern end accounts of Roman Britain describe it as an extension of the Foss Dyke, an accepted transport route between the Trent and Lincoln. Near Morton, Lincolnshire, a boatload of dressed quarry stone, identified with the medieval period, has been discovered in the canal bed.

The arguments for use as a canal are strongest for the “Old Tillage” (no longer considered part of Car Dyke) connecting the Cam at Waterbeach and and the Ouse at Earith via the Old West River. Research by Evans, Macauley & Mills suggest the waterway had a role in the distribution of grain and, possibly, of locally produced Roman pottery. They are equally clear that the primary transport routes further north were by river` and coastal routes via the Wash.

Whilst some sections of Car Dyke north of Peterborough might indeed have been used for transport, the topography suggests that its use as a canal for long distance cargoes was unlikely or at least difficult. The dyke does follow contours where possible but in rising and falling between river basins it is impossible to see how it would provide a continuously navigable route. At some level sections in Lincolnshire it has causeways of never-disturbed ground crossing it and it passes in gradients, up and down the sides of slight ridges.

If not for transport it begs the question of why such a major and expensive piece of civil engineering would have been undertaken. The only likely alternative reason is as a means of creating more productive farmland through improved drainage and flood control. Research over the past 30 years has indicated that immense areas of the fens had been subject to mass colonisation in the Roman period between 100 and 150 AD – and were operated as an imperial estate.

Why is Car Dyke Important?

Along with Hadrian’s Wall it was one of the greatest engineering feats carried out in Britain by the engineers of the Roman Empire.

Whatever its primary purpose it was clearly of great economic significance to eastern Britain. An improved understanding of when it was constructed and why will help us understand more about how the Roman fen edge was governed, its economy, and how the local population lived and worked.