Archaeologists from Newcastle and Sheffield universities have just completed a two week excavation at Crowland searching for the remains of the religious buildings associated with Saint Guthlac. An open-day on Saturday 14th August 2021 provided the opportunity for local people to find out more.

The location of the site is Anchor (or Anchorite) Church Field to the north-east of the town. It was identified by antiquarian William Stukeley in the 18th century. More recently, aerial photography, geophysical surveys and limited excavation have provided definition of where buildings once stood.

The student excavators under the direction of Dr Duncan Wright and Dr Hugh Willmott opened a 30m by 20m trench. They exposed the foundations of a substantial building.

This building was previously thought to represent a medieval chapel, but excavations this year showed it is in fact a medieval hall. This structure would have been used as a residence and was divided into three parts with an ancillary room added to one corner.

The foundations of the hall were roughly one metre wide, suggesting a stone building that would have had a first floor. Both the scale of the construction, and the recovery of finds such as an intricate buckle and glazed roof tiles suggest this was a building occupied by elite members of medieval society. Such halls can be broadly dated to between the 12th and 15th centuries. The recovery of preserved wood from a gully running alongside a wall will allow more accurate radiocarbon dating.

The excavations this year discovered a rich collection of finds from the Guthlac period, including pottery and an elaborate bone comb. While these objects cannot be definitively associated with the saint, they add further weight to the idea that Anchor Church field was indeed the location of Guthlac’s fenland retreat.

Elsewhere on the site, significant quantities of Roman floor tiles, roof tiles and tesserae were found. These materials were probably taken from nearby Roman sites to be reused in building construction. Some of this reused Roman material may be associated with a second building, found at the very east of the excavation in the final few days of the project. Orientated in a west-east direction, this building seems to have featured a number of large columns and there is a possibility that it represents the remains of a church or a succession of churches. 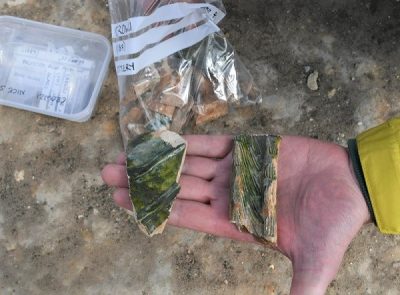 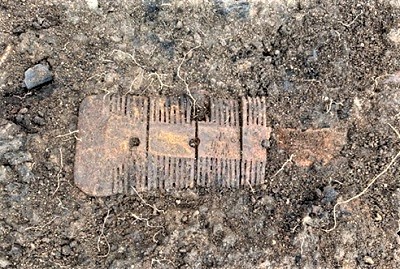 A bone comb, probably dating to between the 7th and 9th centuries 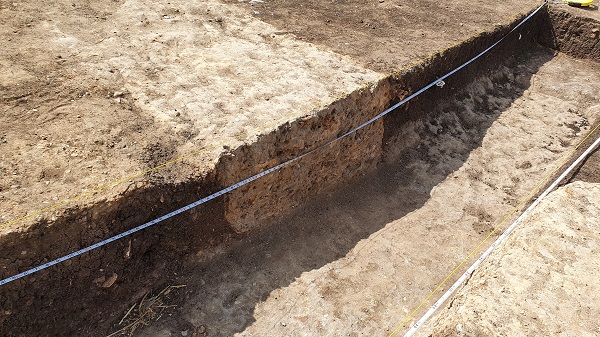 Wall foundations, made of crushed limestone and clay (the lighter material)

The intention is to return to the site to explore adjacent areas in future years. It is hoped that systematic excavation will provide much needed hard facts to clarify the early history of Crowland. 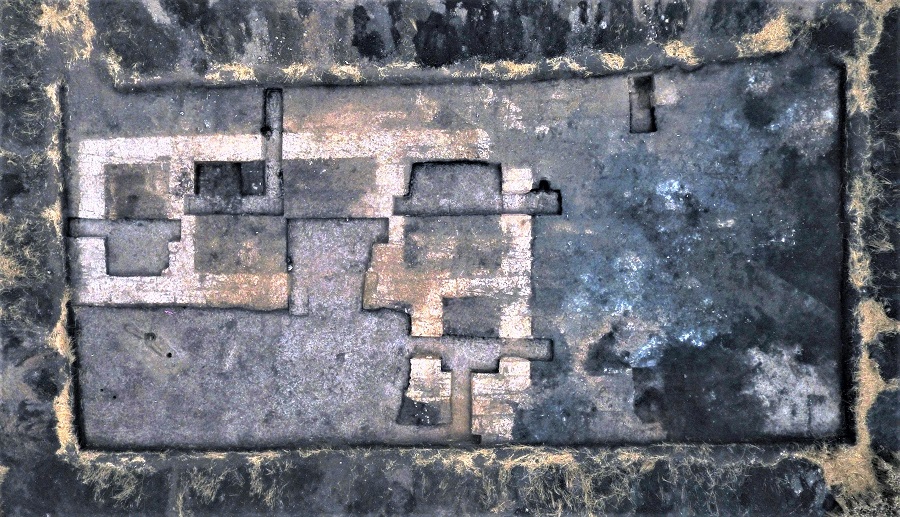 The cult of St Guthlac of Crowland developed from modest origins in the 8th century to its summit in the early 13th century. Guthlac renounced the wealth and violence of his youth joining a monastery at Repton then going on to live as a hermit on the edge of the desolate fen landscape. He is said to have established his cell within an ancient barrow. There are written and pictorial accounts of his life and deeds – some likely to be more reliable than others. He died about 15 years later in 714, tended by his sister Pega (whose name lives on at nearby Peakirk).

An oratory was established at the site of the hermitage and it became a place of pilgrimage. It is believed that the original religious house was wiped out by the Danes in 866. An abbey was founded at Crowland in the 10th century. The current abbey structure dates from the 13th century. The relationship between the abbey and the series of buildings at Anchor Church Field is unclear.

An early account of Guthlac’s life by Felix describes the location of the hermitage – and also includes perhaps the earliest British reference to grave robbers:

“Now there was in the said island a mound built of clods of earth which greedy comers to the waste had dug open, in the hope of finding treasure there; in the side of this there seemed to be a sort of cistern, and in this Guthlac the man of blessed memory began to dwell, after building a hut over it.” 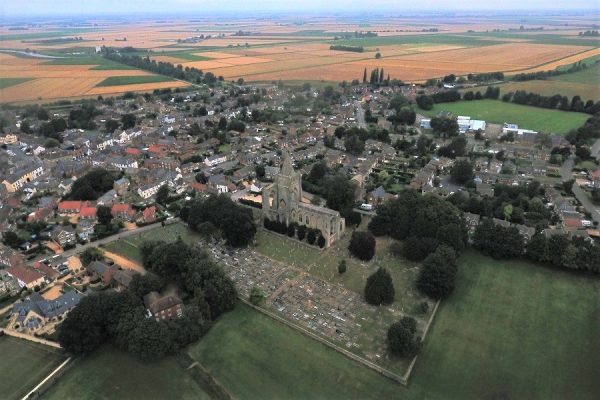 Crowland Abbey and the old town

‘upon a hillock, is the remnant of a little stone cottage, called Anchor church-house: here was a chapel over the place where St Guthlac lived as a hermit and where he was buried.’

In the 19th century Moor and Canham recorded the dimensions of a foundation prior to the removal of 200 tons of Barnack ragstone.

‘The foundations consisted of two parallel walls running east and west, about 14 feet apart and 84 feet in length. On either side, towards the western end, was a room, making the whole width of the western end 42 feet. These foundations consisted of concrete walls, nearly 3 feet thick, with, at intervals, substantial bases of un-hewn stone, more than 8 feet square, three on each side, opposite to each other, about 12 feet apart, with an intermediate base (half the size of the other bases) between the two easternmost bases on the south side.’

Fieldwalking and trial excavation was undertaken in 2004. Finds included mid Saxon pottery and a comb. 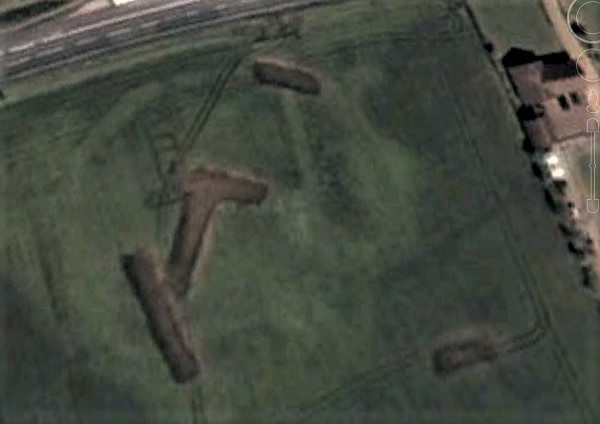 Google Earth image with crop marks showing the foundations seen this year, the circular outline of an earlier feature (perhaps a henge) – and the 2004 trenches

The Cult of St Guthlac