What was St Leonard’s Leper Hospital?

Founded before 1125, it was a leper (or lazar) house supported through almsgiving by Peterborough Abbey. Leprosy was particularly prevalent at this time though such houses also provided for other categories of ill and destitute people. St Leonard’s became known as “The Spital”. [Spital was a Middle English term used to describe a hospital or its endowed land.]

It was still in existence in the 16th century and is assumed to have closed at the time of the dissolution of the monastery.

It was probably located close to the northern end of Peterborough railway station. It gave its name to St Leonard’s Street which was effectively the section of Bourges Boulevard which now runs past the station.

Associated with the hospital was a healing spring or well which was still documented in the mid 17th century.

There are a number of historical records which refer to the hospital. The first mention of it is at the death of Abbot John of Séez in 1125 when there were 13 lepers and 3 servants in the “lazar house”. The Abbey Almoner was responsible for it and started a farm around it. In 1250 the Vicar of Burgh was given the profits of its chapel and became its warden. At the dissolution there were 8 male occupants. After the dissolution it is possible that it became the “Pest House” for Peterborough.

All traces of the building have long since vanished but archaeology has provided an opportunity to learn more about St Leonard’s. Evaluation trenches in advance of the redevelopment of the Midland Road area for housing identified the cemetery originally serving the leper hospital. A full excavation of the site was undertaken Durham University Archaeology Services in late 2014. 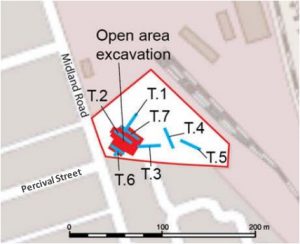 The excavation did not find the hospital building or any structures associated with the cemetery. It did find over 130 inhumations and it is analysis of these remains which is of great interest. 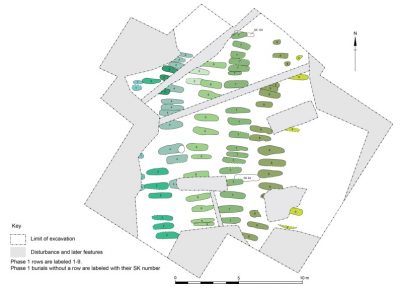 Phase I burial locations and rows 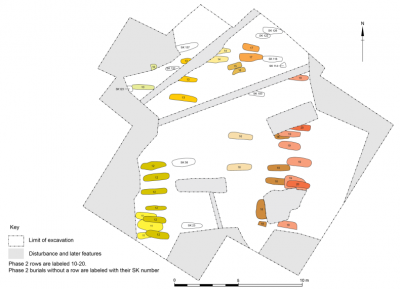 Aside from the human remains there were few artefacts other than 58 Mesolithic flints, 50 pottery sherds (mainly 11-12th century) and 19 copper alloy lace tags (15-17th century).

Summary of Analysis of the St Leonard’s Skeletons

Preservation of the skeletal remains was poor. Most skeletons were incomplete and there was substantial disarticulated material.

There were only 7 non adults – 1 juvenile and 6 adolescents.

There was a bias to males though in many cases sex could not be determined:

As in analysis from other leper cemetery sites only a minority could be identified as definitely or possibly to have suffered from leprosy. This in part reflects the lag between initial signs of leprosy and the onset of changes to bones. It also helps confirm that the leper house was used to house people with a wider range of conditions. 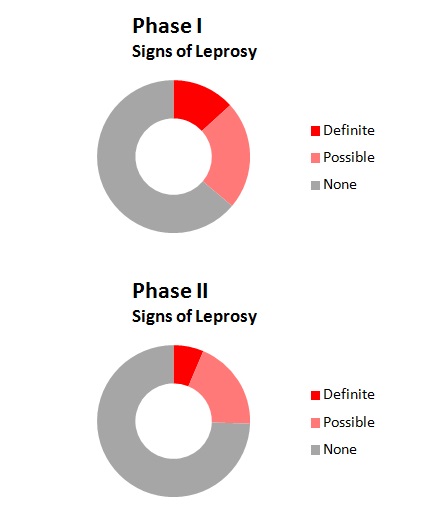 The incidence of joint disease and arthritis was low in both phases.

17 skeletons had evidence of fracture of at least one bone. 5 individuals had rib fractures.

Of the teeth examined, 11.8% exhibited signs of dental caries in Phase I, and 9.3% in Phase II. Dental abscess per tooth position was 2.5% throughout.

The skeletons are being stored at Durham University in anticipation of further research.

Where did St Leonard’s Fit?

The St Leonard’s leper house was one of 5 hospitals and asylums supported by the abbey at Peterborough in the 12th century. They were St Leonard’s and St Thomas Martyr in Peterborough, and St Giles, St John the Baptist and the Holy Sepulchre in Stamford.

The first leper hospitals were established soon after the Norman invasion – before the crusades which have sometimes been blamed for the rise in the prevalence of the disease. Research by Clay records 242 leper hospitals in England.

The cemetery would not have been for the general population of Peterborough. The main burial site until the 1790s was within the cathedral grounds.

Why is St Leonard’s Important?

St Leonard’s itself is unremarkable, but the cemetery excavated in 2014 is considered to be of national importance as so few cemeteries relating to leper hospitals have been found.

In the whole country only 800 bodies have been recovered from leper cemeteries: almost half of these burials were recovered from a single excavation at Chichester.

A full report about the excavation and an analysis of the skeletons was published by York Archaeological Trust in 2017.