Northstowe is a new town being developed on an old airfield site 8 miles north-west of Cambridge City Centre, close to the village of Longstanton. It will eventually be home to around twenty-five thousand people living in 10,000 new homes. But first, following extensive research and geophysical surveys, the Cambridge Archaeological Unit identified areas worthy of investigation, spread across 37 hectares. The site includes the old Longstanton golf course and the RAF Oakington airfield.

On 7th June Alison Dickens of the Cambridge Archaeological Unit provided FRAG with a fascinating update on Phase 1 which is largely complete, and a glimpse of what is to come with Phase 2 (underway) and beyond.

It has been long believed that there were ancient communities living in the area. There is a ridge of sand and gravel with clay to either side. Located close to the fens and waterways of East Anglia, this area was within easy access of European traders and immigrants. Evidence has included aerial photographs such as that taken by the Luftwaffe which reveal old boundaries and trackways.

There had already been archaeological investigation prior to construction of the golf course so the planning for Phase 1 had a head start. Following desktop, geophys, aerial photography and trench evaluation a total of 42 sites of interest were identified. Most have now been excavated. Top soil was removed from an area of 32 hectares allowing an unusual degree of visibility of previous activity. All the subsoil was metal detected providing, for instance, hundreds of coins for dating and distribution evidence. 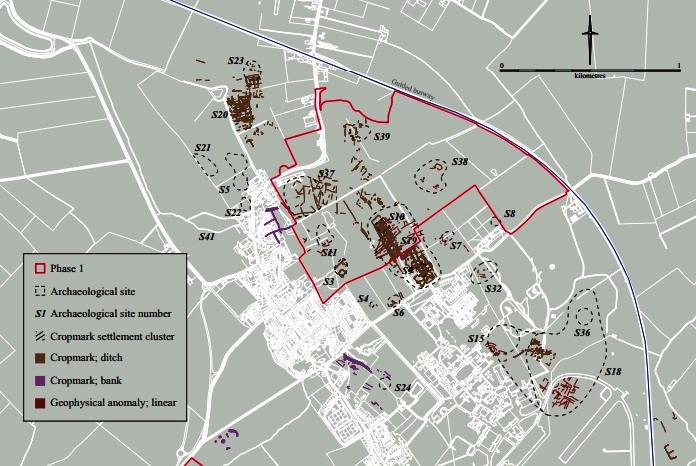 The excavation has revealed distinct Iron Age, Roman, Saxon, Late Saxon and Medieval occupation of the site. Analysis and report writing continues but the evolution of the landscape from pre-history to the current day is evident.

These are similar in shape to other enclosures found elsewhere which have been interpreted as being for animal management. These seem too small for this purpose and seem more likely to define the sites of roundhouses with elongated “driveways”.

These seem to have been superceded by larger “D” shaped enclosures.

More structured ditches and trackways. There appears to be a triangular junction of roadways with an unexplained feature at its centre.

Evidence of lead, copper and iron metalworking on the east side of the settlement.

Most of the coins are from this period with the bulk from the 3rd and 4th Centuries.

Ceramic finds include a pot which appears to have been marked with the name of its owner – Nogniae. 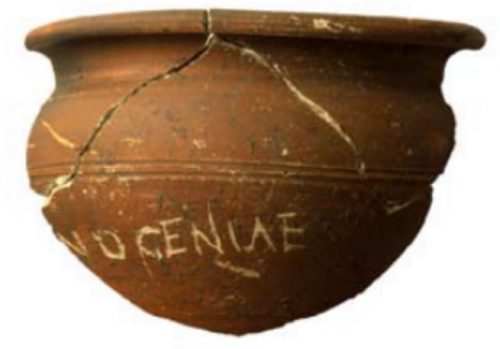 The settlement becomes more concentrated, field boundaries are more formalisIId, ridge & furrow dominates, and the beginnings of the village of Lonstanton appear.

Phase 2 is now underway and will continue into next year.

An Open Day will be held later this summer and we are hoping that there will be opportunities for volunteers to help with finds washing and processing.

We’ll let you know as soon as we have news on these fronts.

No Replies to "Northstowe"