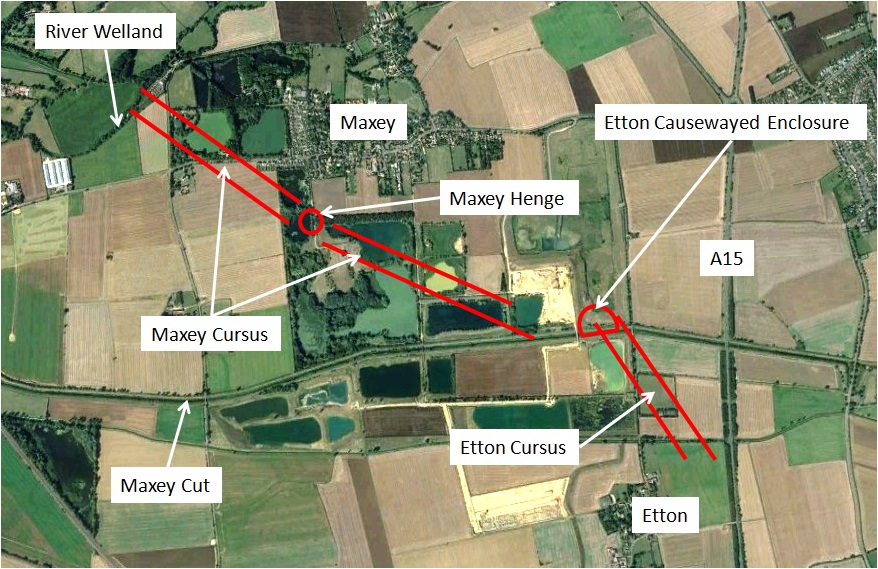 Maxey Cursus, Maxey Henge, Etton Cursus and Etton Causewayed Enclosure are features within a complex agricultural and ritual landscape which existed 5,500 to 3,500 years ago. The sites lie to the north of current day Peterborough, just south of the River Welland.

What is the Maxey & Etton Neolithic Landscape?

The existence of prehistoric features near the villages of Maxey and Etton was identified by aerial photographs, then through excavation in advance of extensive gravel extraction.

The lowland site is situated where the River Welland discharged into the Fen basin through meandering and evolving channels. The landscape described here was used for agriculture during dryer periods, but also held ritual or communal significance for those living in the area. It is likely that settlements would have been on the slightly higher ground, “Maxey Island”.

The types of feature present include examples similar to those discovered elsewhere and a brief explanation of what they are may be helpful:

The Maxey and Etton features span a huge period of history, from when “stone age” communities were just starting to become more settled – to when pottery and metal making technologies were starting to transform people’s lives.

Dating is often speculative and use of lithics (rock fragments) can vary by region but the following is a guide for our region, supported by associated pottery groups: 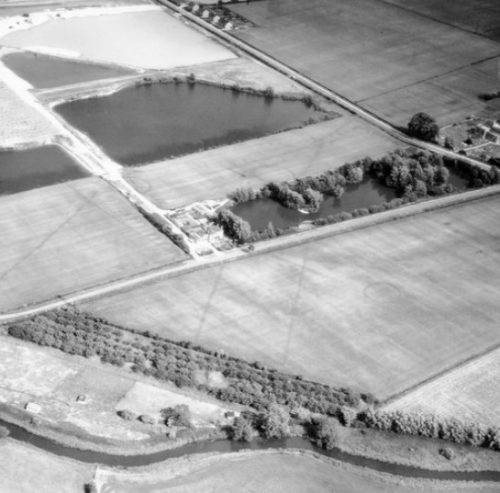 Looking south-east with Maxey church at the extreme right

The annotated maps below show the location of features identified by aerial photography. 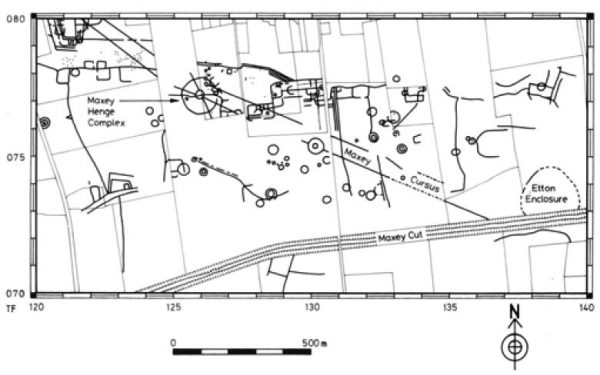 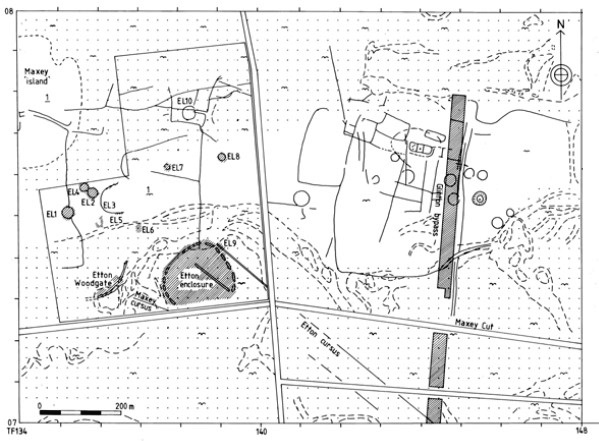 As well as the cursus and henge features, aerial photography had indicated a large number of prehistoric ring ditches, pit circles, hengiform monuments and field boundaries.

During the Neolithic period a stream flowed past the west and north sides of the causewayed enclosure and seems to have formed the focus for two settlements. One was located 500m to the north-east (on the northern side of the stream) and has revealed Grooved Ware pottery. The other has been named Etton Woodgate and lay some 80m to the west of the enclosure, on the other side of the stream.

The complex of features known as EL9 (EL: Etton Landscape) lay close to the meander, on its southern side; these included the easterly ditch of the Etton cursus and a series of Late Bronze Age pits that contained finds suggestive of occupation debris.

Further east, excavation associated with the A15 Glinton bypass, north of the Maxey Cut, revealed evidence for a possible Neolithic or early Bronze Age field system.

Identified from aerial photographs in the 1970s, the enclosure was excavated in the 1980s by Francis Pryor. 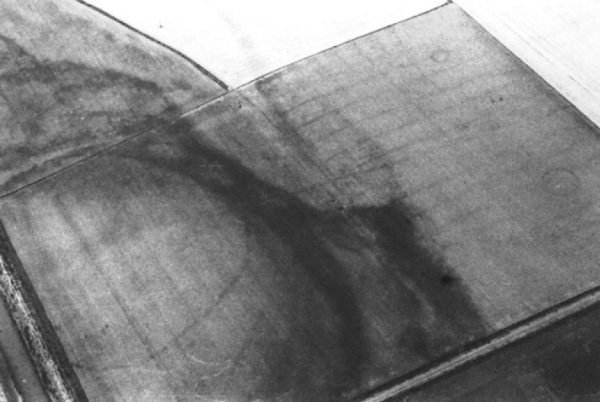 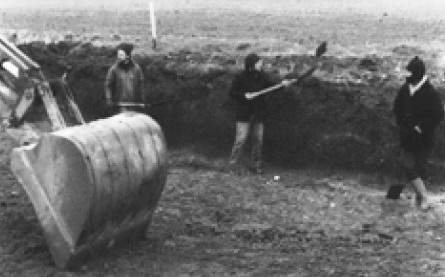 Removal of deep layer of alluvium before reaching the archaeology

Dating from the fourth millennium BC this was the earliest major element in the Maxey & Etton – Neolithic landscape. The causewayed enclosure was small by British standards, comprising a single, ‘squashed oval’ shaped ditch. Causeways entered the enclosure on the north (via a substantial timber gateway), east, west, and possibly the south.

Through the life of the site additional features were built and aligned with care: a north-south dividing fence, aligned with the north gateway and numerous ritual pits, back-filled with pottery (often deliberately smashed), flint, and animal bones. These pits may have represented individual people and the contents allude to the person’s skills, achievements, or social position.

Objects such as complete pots or skulls were placed close to causeways, within the ends of individual ditch segments. Most of the pottery from the pits is a regional variant of the Hurst Fen tradition. Fengate-style wares also feature prominently, and flintwork, ‘imported’ polished stone axes, and other stone objects were also deposited.

The western arc of the enclosure ditch produced some 5000 pieces of worked wood. “The ditch was waterlogged and preserved wood, bark and other organic remains – such as the earliest piece of string (made from ax), yet found in Britain. Close examination revealed that the ditch had been dug and then immediately filled with offerings, which were placed in discrete heaps. These offerings consisted of human skulls, or inverted pots, whose round bases closely resembled skulls. Some of the offerings were of meat bones, or dog skulls. In one case an inverted pot had been placed on a birch bark mat. In a few places querns, or corn- grinding stones had been deliberately broken, before being offered to the ground. Taken together there seemed little doubt that the offerings were making statements about domestic or family life. Soon it came to us that the material placed in each length of ditch represented people or events in a particular family’s history.” (Francis Pryor) 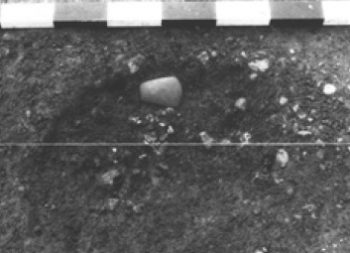 Late Neolithic and early Bronze Age features were the result of the later Etton cursus ditch which cut across the enclosure diagonally.

Etton Cursus
Aerial photographs revealed a very faint ditch on approximately the same alignment as the Maxey cursus, but parallel to it and several hundred metres to the east. This ditch ended within the Etton causewayed enclosure. A parallel ditch was located to the east. Together, the two ditches are known as the Etton cursus.

The Etton cursus ditches have been seen in section on the freshly machine-cleaned sides of the Maxey Cut; they have also been observed in plan some 400m south-east of the causewayed enclosure during excavation ahead of the construction of the A15 Glinton bypass.

One end of the cursus was at the edge of the River Welland. From there it runs south east for 850m then east-south-east for a further 900m. The ditches are about 2m wide and about 58m apart. They appear to have been built piecemeal over an extended period of time. The south-east sections closer to the Etton causewayed enclosure and the former stream channel are the earliest. The central part of the cursus traverses the slightly higher ground dubbed “Maxey Island”.

Where excavated, the ditches were very shallow with no clear evidence either for a bank or for episodes of re-cutting. A discontinuous layer of comminuted charcoal was noted near the base of both. It is not in situ burning but could be associated with land clearance. Finds were minimal, and no real dating evidence recovered. Both ditches appear to have been fully silted up by the time the henge and associated features were constructed. In the southern ditch, nearer the causewayed enclosure, some Beaker pottery was found.

One excavation found a number of post holes along the south lip of the ditch and a large pit near the centre of the cursus. The pit was 4-5m in diameter and filled with a peaty mixture including twigs, small pieces of wood, leaves and hazel-nut shells. Finds from the pit included a Neolithic polished stone axe and nine sherds from a bowl.

An oval enclosure formed by a continuous wall of 156 squared beams had been erected in the henge entrance forming a barrow. Beneath the barrow was a crouched burial.

Ritual objects found included two antlers and a deer rib. The antlers were highly polished and ornamented with geometric chevrons cut into them; the incisions carry traces of red paint. The rib had also been carved and was painted all over – two-thirds black and one-third red.

The henge and ring ditch cut the Maxey cursus in 4 places confirming that the monument post-dated the cursus.

Finds from the outer ditch comprised a few flint flakes, a localised concentration of collared urn sherds and a small quantity of animal bones. There was no evidence for any funerary activity directly associated with Neolithic use of the monument. A scatter of Mid to Late Bronze Age flints was found in the plough soil.

Where did the Maxey & Etton Neolithic Landscape “Fit”?

Contemplating life as I go fishing in the Welland near Maxey in the year 3500BC I might reflect on the sagas, legends and myths passed down over the generations. These might allude to times when the whole landscape was frozen and strange creatures roamed; to mass migration caused by rising sea levels; and to periodic incursions by new people with new ideas from far-away lands to the south. Things were good but forever changing and uncertain. All the more important to revere our ancestors who guided us, look after the holy places, placate our demons, and venerate our gods.

Farming and a more sedentary way of life became the norm from about 4000BC. The population was small but on a limited scale settlements began to appear. Places of ritual and gathering started to be defined within the landscape. Certain locations seemed to hold special meaning and we see a long-term evolution of these “ritual landscapes”. Ever more elaborate earthworks and structures were devised.

The great monuments point to ceremonial importance but the normal life of farming the land and caring for families was also going on. The lower ground was probably flooded in winter but provided useful pasture during the summer. The wet lands to the east offered an important source of waterfowl and fish – and access by boat to a diverse range of neighbouring communities. To the west a network of trackways were starting to provide more formal routes throughout the country.

Why is the Maxey & Etton Neolithic Landscape Important?

The features at Maxey and Etton trace the lifestyle and beliefs of modern man during a little understood period of over 2000 years. The traditions and practices of the Mesolithic nomadic hunter were evolving under the influence of more settled lifestyles, farming and new technologies. By the end of this period we can perhaps start to make connections to the Bronze Age settlers who we are starting to know at Flag Fen and Must Farm.

At Maxey and Etton we see examples of the monuments which echo those appearing from Orkney to the south-west of England.

There is barely any sign of them on the surface but the remains are relatively well preserved in damp ground beneath a thick blanket of alluvium.

Excavation to date has been driven by the need to investigate in advance of gravel extraction. It is highly likely that many more features are present nearby – discovery of which will slowly improve our understanding of our ancestors’ ill-defined lives.