What is Horsey Hill Fort?

Horsey Hill Fort is located 2.5 miles to the south east of Peterborough. It occupies the angle between an old course of the River Nene and an ancient water course known as King’s Dyke. It is some 200m east of Horsey Bridge which carries the road between between Stanground and Whittlesea.

Built in 1643 by Parliamentary troops during the Civil War it comprises a pentagonal earthwork with bastions. The site covers 2.3 hectares with the rampart rising to 4 metres above the base of the ditch. The A605 cuts slightly into the north side of the fort.

A former toll-keeper’s house and Horsey Grange Farm are located on the site. It remains well defined though obscured by vegetation. 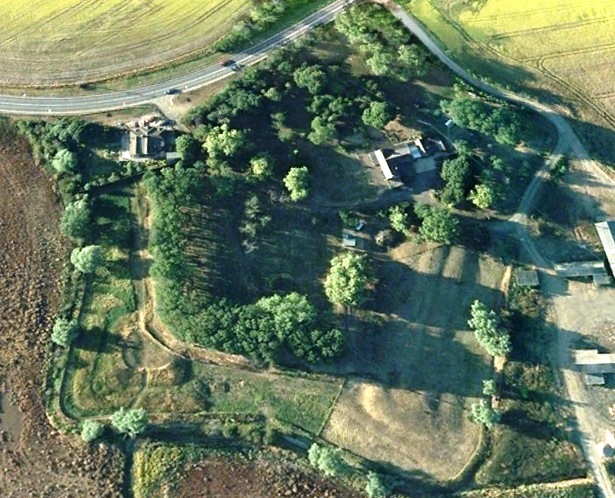 The evidence for the Civil War fort is essentially the visible earthworks which survive. We are not aware of any recorded excavation.

There is an historical reference in accounts of the Civil War. In October 1644, shortly after Crowland and Peterborough fell, the Eastern Association sent 300 men from Cambridge to hold `Horsey Bridge Pass’; this is taken to mean the strengthening of the existing garrison.

The fort is essentially a large gun emplacement or sconce. The sides are each about 110m and the 5 arrowhead shaped bastions project 10m diagonally from the corners (3 survive largely undisturbed). 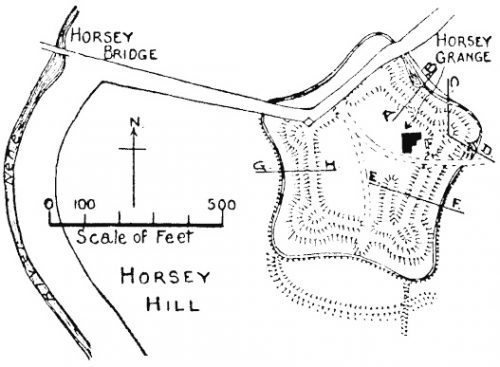 The bank stands about 2m above the central area and is about 3m wide at the top. The inner face of this bank may originally have been near vertical with a firing step or banquette below a timber palisade. Slight hollows in the centre of each bastion mark the positions of the cannons, and there are traces of parapets around the outer edges which would have provided protection for the gunners.

There is a 10m wide terrace between the outer slopes and the partly in-filled ditch. The terrace remains on all but the north western side of the fort and retains slight traces of an outer parapet suggesting that it served as a “covered way” for infantry. The ditch is some 10m across and its outer edge can still be traced around the southern, western and eastern arms where it is marked by a later drainage cut.

In the absence of excavation it is not known what accommodation there would have been for any garrison. However, based on similar structures elsewhere it is likely this would have consisted of tents or temporary wooden shelters within the structure. A magazine for gunpowder was probably located within one of the bastions.

Where did Horsey Hill Fort Fit”?

In the Civil War, Huntingdonshire became a frontier county of the Eastern Association led by Oliver Cromwell. The Eastern Association initially took a defensive stance, concentrating on the fortification of Cambridge and the control of major road and river routes across the fens. Early in 1643 Cromwell embarked on a strategy to consolidate the Association’s military frontier; first securing the Royalist ports of Lowestoft and Kings Lynn, then moving on to take Peterborough and finally Crowland, the last Royalist outpost in the fens.

In May a Royalist rebellion on the Isle of Ely was eventually suppressed by troops from Cambridge. This event stimulated a strengthening of the line of defence from the north and west. Garrisons were posted at Wisbech and Earith. Horsey Hill Fort was probably constructed as part of this line of defence, strategically located in relation to the Nene, Whittlesey Mere and the Fen Causeway.

Each bastion would have served as a gun emplacement and it is significant that three of these cover the western river and road approaches to the fort. Vegetation around the fort would have been cleared to expose any attacking force.

It seems that Horsey Hill Fort never saw action during its short life. During the second phase of the war there was little activity in East Anglia.

Civil War forts were designed to be built quickly, with an unskilled workforce. Earth ramparts were effective in absorbing or deflecting cannon shot, and were much cheaper than stone. The basic elements were often very similar to those found at Horsey Hill though shapes and detail differ. For instance the forts at Earith (The Bulwark) and Newark (Queen’s Sconce) are both four sided. 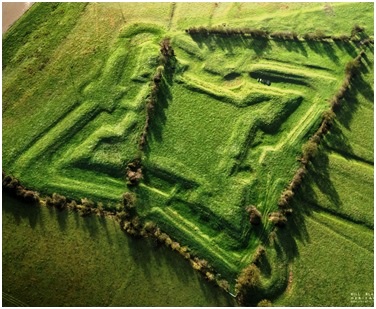 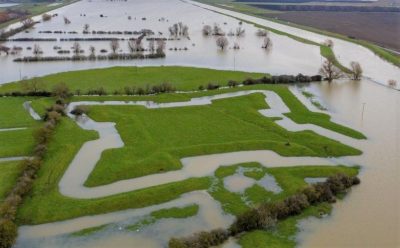 Why is Horsey Hill Fort Important?

The fort at Horsey Hill is a fine example of a “sconce” type artillery fortification of the Civil War period. It shows clear influences of contemporary continental military design, developed in response to the increased mobility of contemporary warfare and the dominance of artillery.

The fort’s position demonstrates the importance of the Fen Causeway and Nene crossing within the military frontier surrounding the Isle of Ely. Together with a number of other fortifications in the region it illustrates the variety of defensive measures employed by the Eastern Association.

Whilst many Civil War forts were constructed between 1642 and 1651, most are no longer visible as a result of destruction during the war, intentional demolition after the war, urbanisation in the 19th and 20th centuries and intensive agriculture. A few have been located by archaeological excavation (eg Gloucester, Exeter, and Chester).