An important report on the Roman pottery industry in Cambridgeshire is now available online from the Archaeology Data Service.

The report by Oxford Archaeology East provides the first complete study of the Horningsea pottery industry and a commentary on Roman pottery supply in southern Cambridgeshire. Examination of Horningsea ceramic material, including all known kiln sites, has now provided a full chronology and type series for the industry, beginning in the Flavian period (AD 60–70) and ending in the late 4th century AD (c.AD 370). The distribution network of Horningsea wares is now understood and provides an important piece of missing ceramic information for the region as a whole, and Cambridgeshire in particular.

This report has also generated – for the first time – a baseline and general synthesis for Roman pottery supply in the eastern region. In addition, this study sheds light on the nature of the Roman fens and Romanisation, and on the role of the putative ‘imperial estate’ in the fenland. The project has sought to examine the relationship between the ‘urban’ ceramic supply of Roman Cambridge and its hinterland, the results of which now cast doubt on the nature of Cambridge as an urban centre per se, while identifying a new small urban site at Littleport, in the fens.

The study has determined a complete chronology for the Cambridgeshire Roman canal at Waterbeach, formerly known as part of the Car Dyke: it is now clear that this did not form part of the same route as that found in Lincolnshire and that the Cambridgeshire section should henceforth be referred to by its ancient local name of Old Tillage. Analysis has confirmed that, although the dyke’s function as a canal is not disputed, Horningsea ceramics were not a significant trade item distributed along this route.

There is much contextual information concerning the Romans in Peterborough and north Cambridgeshire, and detailed analysis of the distribution of Nene Valley pottery. 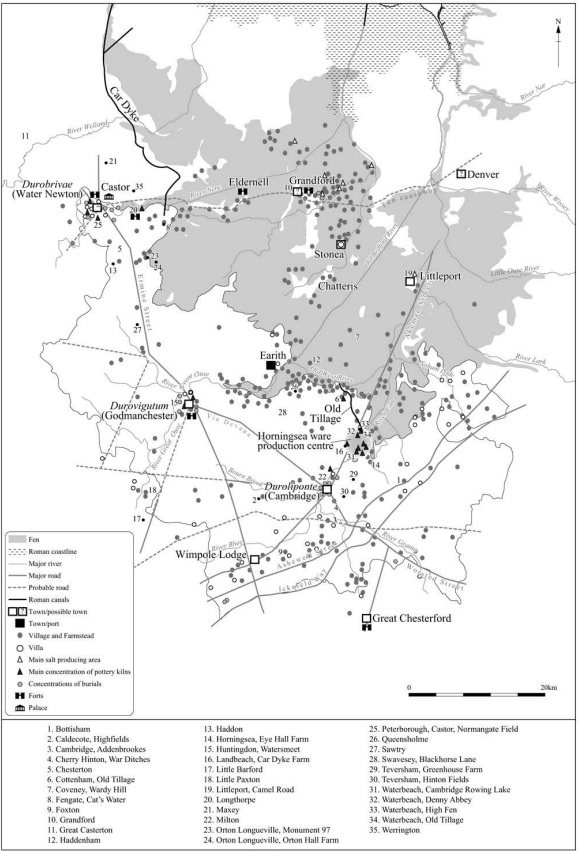 “The Production and Distribution of Medieval Pottery in Cambridgeshire”, by Paul Spoerry and Carole Fletcher, has recently gone out-of-print and in accordance with EAA policy is now available as a free PDF download from the EAA website at: