The History and Archaeology of Peterborough Cathedral Square

An improvement project by Peterborough City Council initiated in 2008 involved the re-laying of much of the street and pavement surfaces as well as the demolition of the unsightly 1960s “Norwich Union building” which had been home to the post office. This work provided a unique opportunity for archaeologists to observe what lies beneath the modern surfaces. An initial evaluation was undertaken in late 2008 followed by excavation and observation through to August 2010. This article draws on the report and subsequent book published by Northampton Archaeology and MOLA.

There were no major revelations but much evidence to fill gaps in our historical record, and better definition of the buildings and structures which have occupied Peterborough’s market square over the last 900 years. 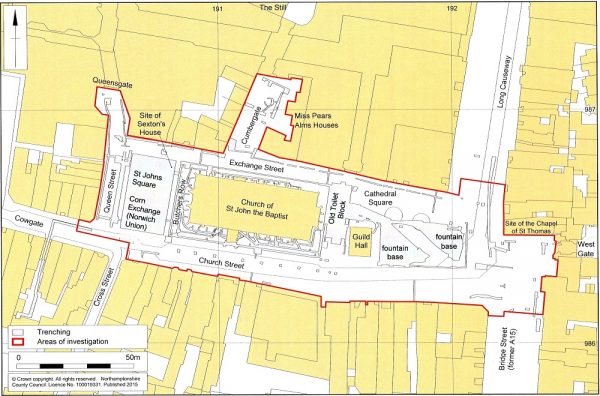 There are few signs of settlement to the west of the monastery prior to the 12th century. The non monastic town was centred to the north east of the abbey in the area of Bond Gate (Boon Gate).

Following a fire in 1116 which destroyed the monastery and much around it Abbott Martin de Bec set about a major re-building project. A new and larger cathedral was to be constructed, the monastic boundary was taken westwards by 150m, and a new town established around a central market square.

Construction of the cathedral was going on for decades until it was consecrated in 1238. The “Marketstede” was laid out by around 1145. Peterborough was granted an annual fair in 1189. Norman Gate between the market place and the abbey precincts was constructed between 1177 and 1194. The first town bridge was built in 1308. A map by John Speed from 1610 shows the main elements of Peterborough as it would have been during the medieval period. 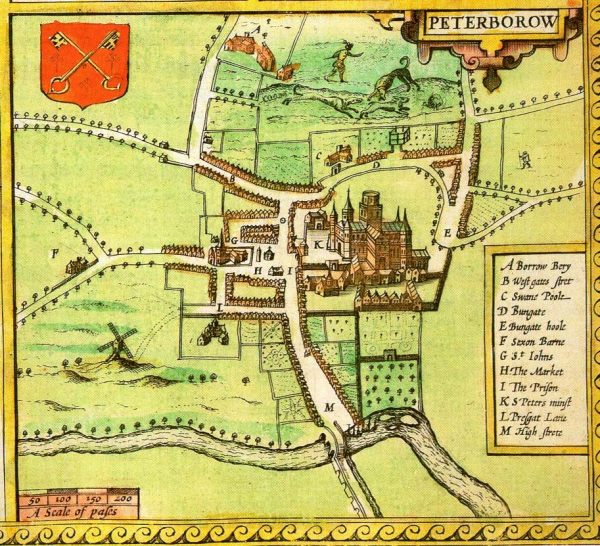 1610 Map of Peterborough by John Speed

The parish church of St John the Baptist was relocated to the middle of the market square in the early 15th century. At this time the Chapel of St Thomas the Martyr was demolished (current site of Starbucks).

One of the mysteries which the archaeological work sought to address was why St John’s church sits very much lower than the surrounding ground level. 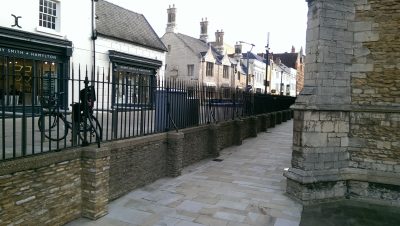 The Guildhall which survives to the east of St John’s was built in 1670-1 in celebration of the restoration of Charles II. It stands on, or close to, the site of a covered “Butter Cross” which was the site of the dairy market. It is believed that the “Chamber over the Cross” replaced an earlier timber framed Moothall and Guildhall standing on the northern side of the square.

A plan of 1721 by Thomas Eyre shows a narrow row of buildings between St John’s and the Guild Hall, the Sexton’s house at the north-west corner of the church grounds, and Butchers Row (or Shambles) running north-south at the west end of St John’s. A building immediately to the west of Butchers Row came to house the playhouse theatre. 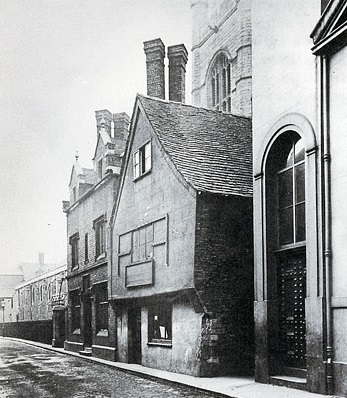 Peterborough – Exchange Street (formerly St John’s Street) in about 1908. The sexton’s house is on the left and the building on the far right is the rear corner of the Corn Exchange.

Whilst few of the older buildings surrounding the square survive, Peterborough residents will be familiar with Miss Pear’s Almshouses (built in and 1903 and now Carluccio’s); an 18th century town house on Queen Street (now The Queen’s Head); a pair of 17th century gable end buildings on Church Street (now Ambitions Personnel, and DV Nails & Beauty); and a 15th century timber-framed building on Cumbergate (opposite Miss Pear’s). 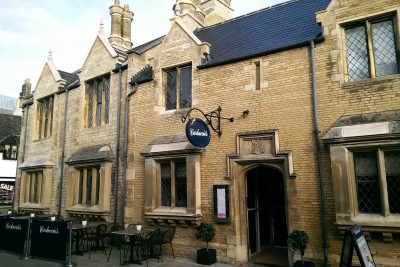 Almshouses at corner of Exchange Street and Cumbergate 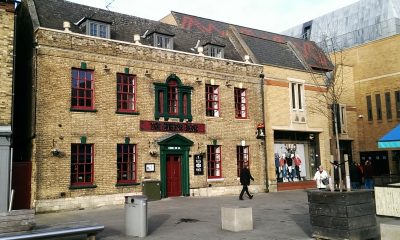 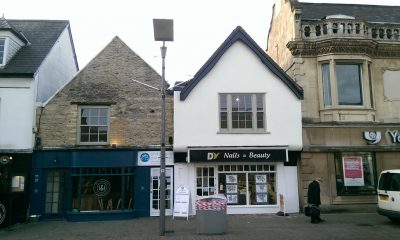 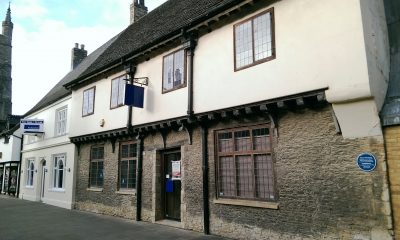 During the 19th century an elaborate lamp-post is known to have been positioned in what is now Cathedral Square. This was replaced in 1897 by a fountain in memory of the first mayor, Henry Pearson Gates (now in Bishops Road gardens). 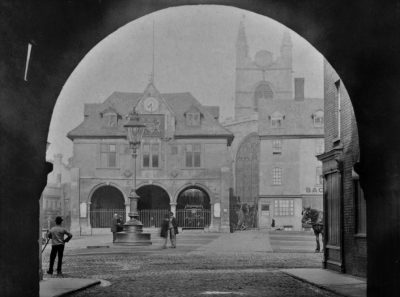 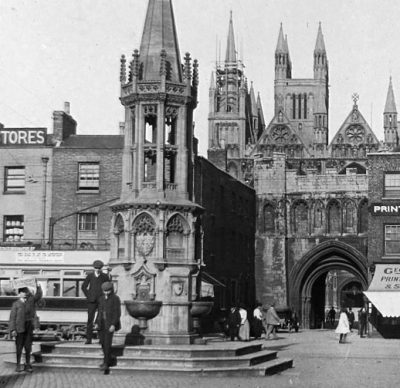 The archaeological study from 2008 to 2014 identified a succession of ground surfaces from the creation of the market square in the 12th century through to the current day.

The initial surface appears to have been laid directly on natural clay, sand and gravel deposits suggesting large-scale soil removal when the area was first established as a market. 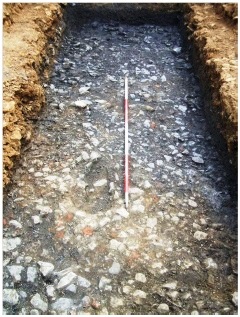 The surface of the original market square was overlaid by an accumulation of dark organic silts, containing finds dating through to the 16th century. The pungent fine black silts represent many years’ household and animal waste; this was the cause of much bemoaning by the townsfolk and derision by visitors. 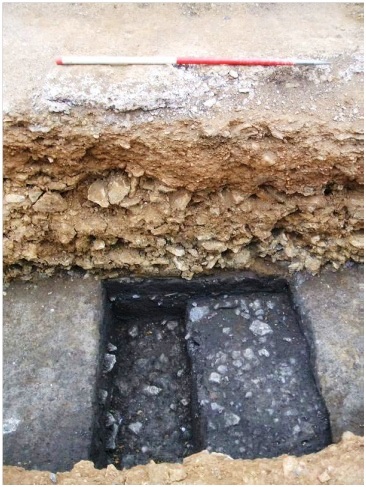 The raising of the ground level and resurfacing of the square was probably contemporary with the Guildhall. This would have involved the removal of all existing buildings on the south side of the square, as well as the removal of the market cross. In the late 18th or early 19th centuries the square was again raised and resurfaced, now with pitched limestone. [This work had been undertaken by the Peterborough Pavement and Improvement Commission established in 1790.] 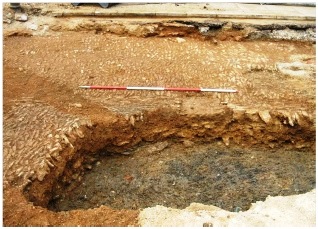 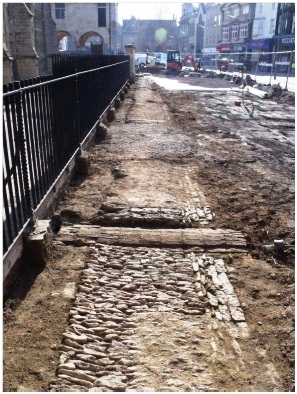 Shallow gutters between the pavement and the road facilitated drainage. A surface of granite sets of the 19th-century survived in a few places below the late 20th-century slab pavement, which has now been replaced by the fountain development. 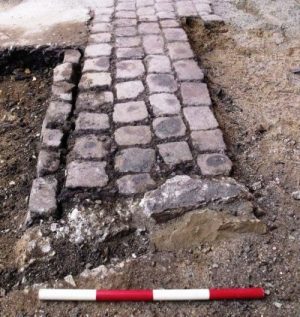 The reason that St John’s is sunk into the ground now seems clear. Whilst it is possible that soil contaminated by the butchery trade was removed prior to construction, the primary explanation lies with the repeated addition of new street surfaces – particularly as attempts were made to overcome the accumulation of silt, filth and organic matter.

An unexpected cemetery to the west of St John’s churchyard wall was discovered. There were an estimated 17 graves, likely to be a remnant of a larger burial ground which was being used until the reformation. It had previously been believed that parishioners were buried on land to the north of the abbey church at this time. 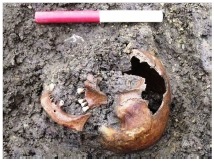 There have been a number of now vanished buildings across the Cathedral Square site. Identified by the archaeologists as Buildings 1, 2, 3 & 4, structures on the east end of the site would have included the “Prison” identified on the John Speed Map of 1610. Between the Guildhall and St Johns were buildings 5, 6, 7 & 8 which were in existence from at latest 17th century through to the 20th century; a part of their basements correspond with the former underground toilets – and now pumping station for the fountains.

Cellar of building between Guildhall and St Johns

Immediately west of the church were the foundations of the medieval “Butchers’ Row” and nearby Sexton’s House. 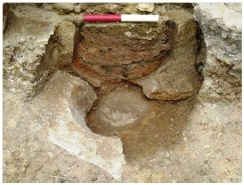 And further again to the west demolition of the 1960s “Norwich Union” site revealed its precursors – the playhouse (1799) and the Corn Exchange (1846). 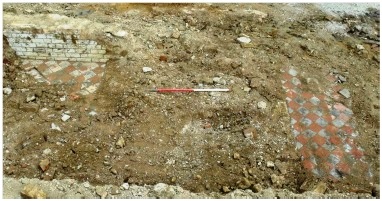 Where did Peterborough Cathedral Square Fit?

Whilst we are using the term “Cathedral Square” to describe the central part of Peterborough this term is a little misleading. In earlier times the more accurate description was “Marketstede” or “Market Place”. Over time various buildings (including St Johns and the Guildhall) encroached on this space. However, it was the meeting point of major routes in and out of the town and it was, until the 19th century, the location of both cattle and other markets.

More Information about the History of Peterborough Cathedral Square 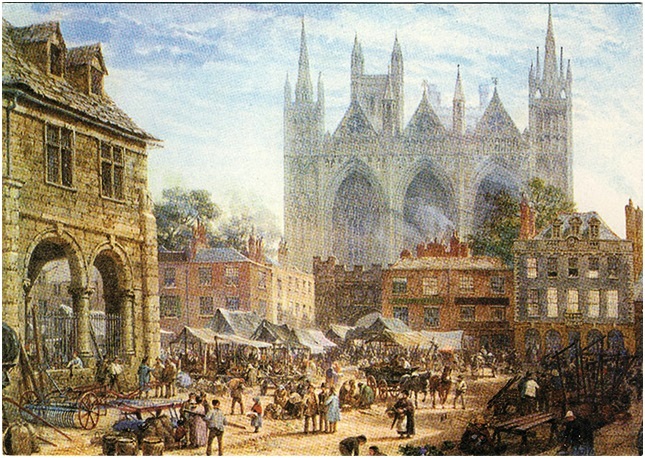