Members of FRAG recently visited Devil’s Dyke near Newmarket. With David Crawford-White as our expert guide we not only gained a real feeling for its scale but learnt much about its significance within the ancient landscape. 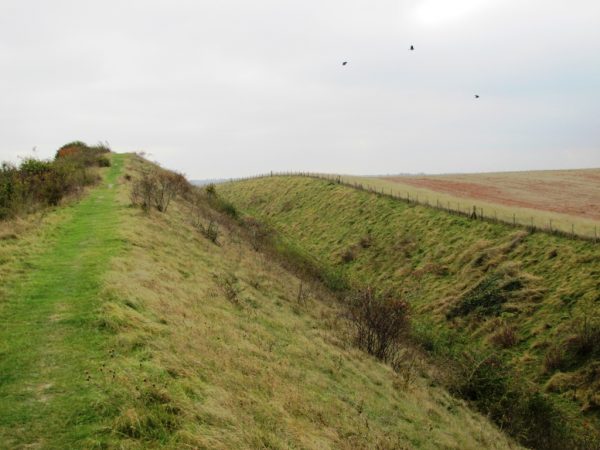 In the afternoon we moved on to the museum in nearby Burwell with an eclectic array of objects including Roman pottery, a Saxon skeleton, an early telephone exchange (working), and a 19th century windmill.

Devil’s Dyke, or Devil’s ditch, is the largest Anglo Saxon Dyke in Britain. The chalk wall stretches in a near perfect straight line for 7 miles from the Fen edge at Reach to the higher wooded ground at Ditton Green. The section we walked near Burwell is about 11m high from base of ditch to the top of the bank. The ditch is on the south east side of the rampart.

What most of us did not previously know was that it was just one of a series of such dykes in the area – all in a similar orientation and straddling the Icknield Way and Street Way. Devil’s Dyke is the largest but Fleam Dyke, Brent Ditch and Bran Ditch are significant in their own right. 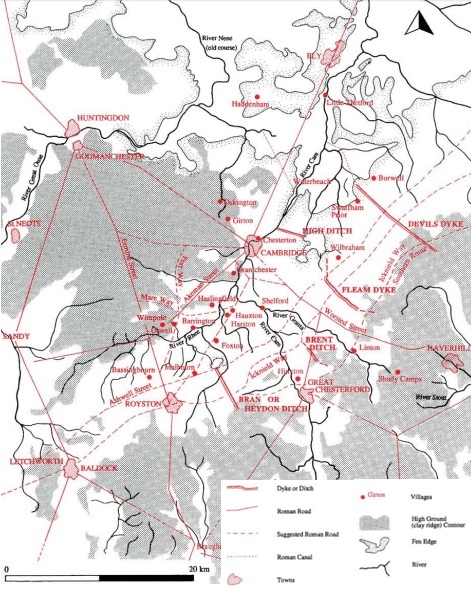 Devil’s Dyke – What was it for?

The Dyke was constructed in the 5th or 6th centuries – perhaps by the Saxon kings of the East Angles in order to defend their newly established lands from attack by the Britons. It would certainly have helped provide control over the movement of people through this important communications corridor. Perhaps traders could pass over or through the wall upon payment of tolls.

Whoever constructed this great defence certainly had access to a very large workforce.

Other Archaeology near Devil’s Dyke

From Devil’s Dyke we were able to look across to three other major archaeological sites which highlight the importance of this Fen edge location over the centuries.

Gallows Hill is an Iron Age and Romano British temple site in the form of square ditched enclosures with buildings within.

Towards Reach there was a large Romano-British villa – with bath house and hypocausts.

And on the edge of Burwell there are the remains of one of the “Castles of the Anarchy”. It was built by King Stephen in the 13th century, though never finished.