This beginner’s guide to identification of knapped flints and stone tools has been written by Barry Bishop and is one of a series of introductory guides published by the community archaeology network, Jigsaw.

The aim of this guide is to help in recognising flint tools and in distinguishing deliberately modified from naturally occurring rocks.

Why are Stone Tools Important?

So there are lots of them, and they were made over a long period of time. But what can we do with them? The first thing we must do is to recognise them and distinguish them from natural background stone. Stone undoubtedly was and still is used in completely unmodified states – many people have used a stone as a hammer at some point if nothing else is available. But unless it has been visibly modified or we find them in an unusual context – piles of small rounded stones found near hillfort entrances for example, that may be a cache of slingstones – it is usually very difficult to be sure that a natural stone has been used if that use does not leave traces. In most cases we must look for signs that the stone has been intentionally modified, and this can occur in two main ways:

Once artefacts had been shaped, either by pecking or knapping, some were further modified by grinding and polishing; eventually this can achieve a mirror-like finish.

In East Anglia we do sometimes find imported stone, mostly from northern or western Britain and on rare occasions we might find stone such as Jadeitite that has come from as far as the Alps. However, massively outnumbering those and overwhelming used for ‘everyday’ tools in the region is flint which was worked by knapping.

Flint is very hard, and this means that its edges can be incredibly sharp and resistant to wear. But just as important is its structure. It is mostly a silicon dioxide, as is sandstone or glass, but it has what is known as a crypto-crystalline structure. It is crystalline, but the crystals are so small that they do not deflect any force waves that travel through. Therefore, with a lot of skill, and a bit of luck, it is possible to control how it fractures, making it possible to shape lumps of flint and detach flakes of predetermined shape and size. Unfortunately there are also natural processes that can cause flint to fracture and we must distinguish between pieces that have been knapped and those fractured naturally.

Essentially there are two ways that flint can fracture:

Thermal Fracture
With thermal fracture the break is caused very slowly, as the flint heats up or cools down. The break starts in the middle of the nodule, often around an impurity, and the line of fracture causes multiple concentric rings to form on the broken surface, that radiate out from this point. 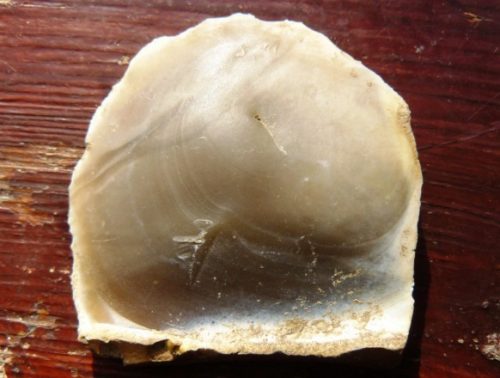 The image above shows a spall of flint that has split off a larger nodule through thermal contraction and expansion, a type commonly known as a ‘potlid’ spall. The point at which the fracture was initiated is an impurity and can be seen as a darker mark just above the centre of the flint, and rings, representing the progress of the fracture, can be seen to emanate from this to its edges. 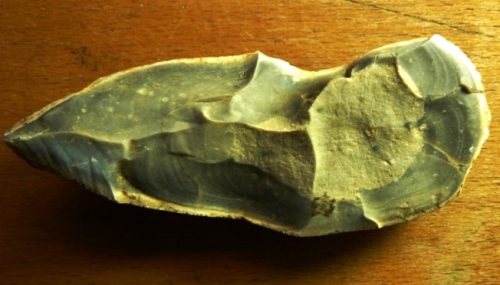 This image shows a piece of flint with several thermal facets. Although in some ways it looks flaked, closer inspection shows all the rings developed from inside the flint and therefore could not have been caused by being hit. 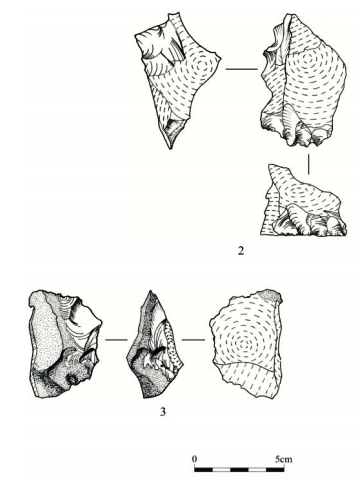 This illustration shows pieces of thermally fractured flint that were later struck and used as core tools during the Later Bronze Age. The natural thermal fractures can be seen as concentric rings whilst the deliberately struck scars have rings that start from the edges of the flint and radiate inwards. Their resemblance to some types of marine shells has led percussion fracture to often be termed ‘conchoidal’ (shell like) fracture.

Percussive Fracture
With percussive fracture, the initiation that causes the break to start happens suddenly and always from the outside – you simply cannot hit the inside of a piece of flint. This leaves a number of features or attributes that should be present on all struck flints. In reality they are not always easy to see on all pieces, and of course many struck flints are broken, so parts might be missing. However, with this knowledge and by looking at as many real struck pieces as possible, it does become easy to confidently differentiate humanly struck from naturally fractured flints. 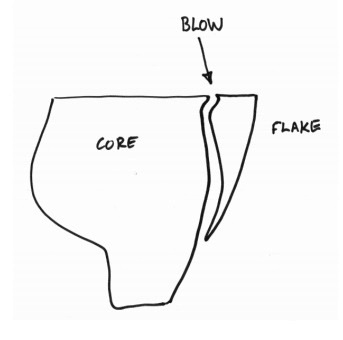 When a piece of flint, or core, is struck with sufficient force a fracture is initiated from where the blow lands and travels through it until it re-emerges on the surface elsewhere. The piece detached is called a flake. With skill, this line of fracture can be carefully controlled.

Percussion fracture can be achieved by three main ways, all of which leave slight variations on the flakes’ attributes: 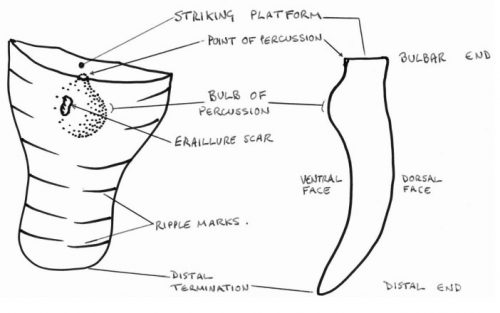 This image shows the principal attributes that can be seen on the ventral face (the inside bit that was attached to the core) of a flake. The cores will retain scars from where the flake has been detached which will show identical attributes, but of course in reverse!

Dating flint assemblages is usually achieved in two main ways: If we are lucky we may find chronologically sensitive diagnostic pieces, or type fossils: these are implements that were only ever made during one period. Microliths, for example, appear to have only been made during the Mesolithic, and polished axes during the Neolithic. Arrowheads also changed in shape over time and therefore can be reasonably accurately dated.

However, there are only a small number of these types of tools and more often than not they are not present in an assemblage. We therefore have to rely on changes in the ways cores were worked and tools produced – the technology of an assemblage. Luckily for us there is an infinite way people can reduce a lump of flint and the methods people used changed over time. So what we do is record all of the attributes of an assemblage, not least the waste pieces, and try to reconstruct the ways the knappers dealt with their flint. In order to do this accurately we need as much of the waste as possible, so it is always worth keeping all of the struck flint from excavations or field surveys, not just the nice bits, it all adds to the story!

Hopefully this guide will help in identification of knapped flints, and differentiating natural flints from those that have been purposefully struck. For those who wish to further understand flint and knapping techniques the following manuals may be useful:

Very in-depth accounts include the following:

Odell, G.H. 2001 – Stone Tool Research at the End of the Millennium: classification, function and behaviour. Journal of Archaeological Research 9 (1), 45–100.

Pelcin, A. W. 1997a – The Effect of Indentor Type on Flake Attributes: evidence from a controlled experiment. Journal of Archaeological Science 24, 613–621.

Pelcin, A. W. 1997b – The Effect of Core Surface Morphology on Flake Attributes: evidence from a controlled experiment. Journal of Archaeological Science 24, 749–756.

Pelcin, A. W. 1997c – The Formation of Flakes: the role of platform thickness and exterior platform angle in the production of flake initiations and terminations. Journal of Archaeological Science 24, 1107–1113.

This step by step guide to archaeological techniques is one of a series prepared by Jigsaw – a network of Cambridgeshire groups working alongside Oxford Archaeology East. The guides are available for download from the Jigsaw Website. Copyright in these guides belongs to Jigsaw and the authors.