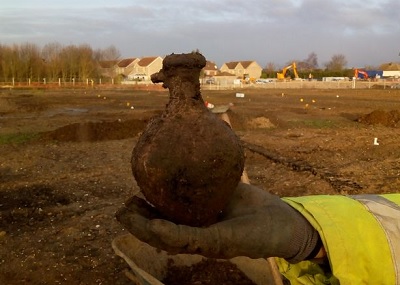 A 7 month project by Oxford Archaeology East has revealed continuous occupation from the Iron Age to late Roman and beyond. The 4 hectare site off Farriers Way in the village Warboys was being investigated in advance of housing development by Bellway Homes.

The earliest finds include eight roundhouses, some of which date back to about 100BC. Evidence of Roman rural industry included a 4.6m corn dryer and kilns. There were also Saxon pottery and beads indicating further evolution of the settlement before it gave way to agriculture.

“Our archaeological investigations at Farriers Way have revealed a hugely important, and a hitherto unknown, settlement that was occupied from the Iron Age, around 2,500 years ago, and throughout the entire Roman period. What makes this site really significant however, is that we have evidence of early Saxon occupation mingled with the latest Roman remains, making this a rare example of the Roman to Saxon transition in the East of England.”