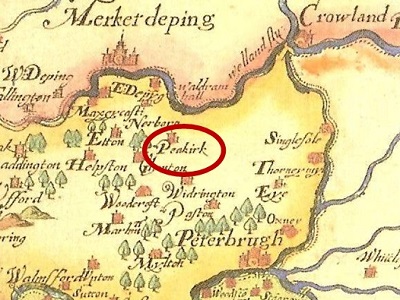 Peakirk is known for its association with St Pega, who reputedly founded a hermitage there and gave the settlement its place-name [‘Pega’s church’]. Whilst Peakirk’s history is sporadically-documented from the eleventh-century onwards, archaeological evidence indicates that the area first was colonised by Neolithic folk and that there was almost-continuous activity in the heart of the present village from the Romano-British period onwards.

This talk unveils Peakirk’s story through a combination of archaeology, architecture, topography, maps, photographs and written sources. It also features the work of PAST [Peakirk Archaeological Survey Team], an independent, self-funding group, whose recent projects have included re-plotting the route of the Roman watercourse, the Car Dyke, dispelling the ‘tradition’ of a Romano-British villa, rediscovering ‘lost’ buildings and revealing more about Peakirk’s diverse and secret heritage.

Dr Avril Lumley Prior developed an interest in Anglo-Saxon history during her childhood in Sunderland. After accepting a teaching post in Peterborough, in 1970, she transferred her attention from Northumbrian to Mercian studies. Upon her early retirement in 1995, Avril attained an MA and a PhD on historically-based subjects, both at Leicester University. She is currently conducting research in and around Peakirk and regularly presents and publishes her findings. With her husband, Greg, she is a founder member of PAST [Peakirk Archaeological Survey Team].