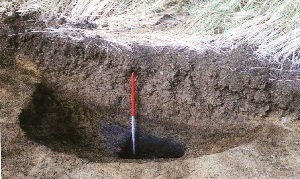 Fieldwork at Baston took place over a 48ha area between 2002 and 2014. The site is located on the western Fen Edge at between 3m and 5m aOD.

The main feature was a middle Bronze Age field system and settlement. A round house, pits, wells and a long routeway for moving and sorting cattle were uncovered. Remains of log ladders, buckets, and hurdles were also found.

A small Roman settlement and routeway linked to the Car Dyke was also excavated.