Sacrifice and the End of Minoan Crete 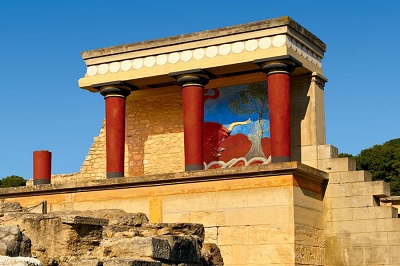 Reaching its peak in the 15th and 16th centuries BC, the Minoan civilisation on Crete was remarkable for its great cities and palaces, its extended trade throughout the Levant and beyond, and its use of writing. Its sophisticated art included elaborate seals, pottery and vibrant frescoes on palace walls. These frescoes display both secular and religious scenes, such as magical gardens, monkeys, and wild goats or fancifully dressed goddesses. Among the most familiar motifs of Minoan art are the snake, symbol of the goddess, and the bull; the ritual of bull-leaping, found, for example, on cult vases, seems to have had a religious or magical basis.

Michael read Archaeology and Ancient History of Western Asia at the Institute of Archaeology, UCL.